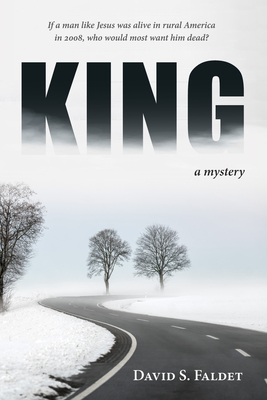 Gospel in an age devoid of miracles, King: A Mystery is set in the year of Obama's first election, a year of catastrophic floods. Tom King, twin brother of religious leader Joshua King, tells the story of night watchman Arnie Mikesh's investigation of the death and life of Joshua, whose car wreck he discovers on a country road. Joshua King, whose ministry is dedicated to the Spirit he addresses as ""Mother,"" provokes scorn and occasional violence from Christians, politicians, law enforcement, and powerful agricultural interests. Divisions among King's followers about whether he is the reincarnation of the Messiah trouble his ministry. Mikesh's investigation leads him from a labor organizer to cult members and a car body repairman, from rural Iowa where King has established his ministry to the state capital where King clashes with authorities. The unravelling and ultimate solution of the mystery of King's death awakens Mikesh to a new sense of himself and brings him close to Mary Towers, the woman who haunted King's life. ""King is a story, both a subtle and compelling mystery. David Faldet has woven together a story that will take the reader on a remarkable journey."" --Philip Freeman, Pepperdine University David S. Faldet has deep roots in Northeastern Iowa, where he makes his home. He teaches literature and writing at Luther College and is the author of Oneota Flow (2009).