These Things Hidden: A Novel of Suspense (Paperback) 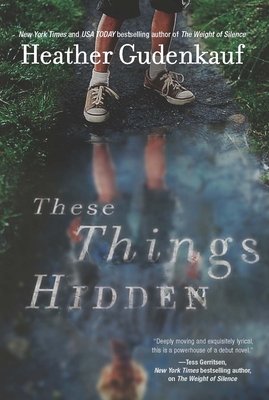 By Heather Gudenkauf
$15.95
On Our Shelves Now

“Allison Glenn has just been released from prison for a heinous crime committed when she was 16. Now 21, she is returning to her hometown, Linden Falls, to try and make reparations with her parents and Brynn, her sister, who was with her the night of the crime. A story too often seen in the news is shared anew in this powerful novel of family responsibility, which demonstrates that the choices one makes will affect oneself and others for a lifetime.”
— Karen Briggs, Great Northern Books and Hobbies, Oscoda, MI

When teenager Allison Glenn is sent to prison for a heinous crime, she leaves behind her reputation as Linden Falls' golden girl forever. Her parents deny the existence of their once-perfect child. Her former friends exult her downfall. Her sister, Brynn, faces whispered rumors every day in the hallways of their small Iowa high school. It's Brynn--shy, quiet Brynn--who carries the burden of what really happened that night. All she wants is to forget Allison and the past that haunts her. But then Allison is released to a halfway house, and is more determined than ever to speak with her estranged sister. Now their legacy of secrets is focused on one little boy. And if the truth is revealed, the consequences will be unimaginable for the adoptive mother who loves him, the girl who tried to protect him and the two sisters who hold the key to all that is hidden.

Heather Gudenkauf is an Edgar Award nominated, New York Times and USA Today bestselling author. Heather lives in Iowa with her husband and children. In her free time Heather enjoys spending time with her family, reading, and running.

"The Weight of Silence is a tense and profoundly emotional story of a parent's worst nightmare, told with compassion and honesty. Heather Gudenkauf skillfully weaves an explosive tale of suspense and ultimately, the healing power of love."

"Deeply moving and exquisitely lyrical, this is a powerhouse of a debut novel."

"Gudenkauf's scintillating second suspense novel...slowly and expertly reveals the truth in a tale so chillingly real, it could have come from the latest headlines."

"One Breath Away takes the reader on an electrifying ride that is, by the end, both terrifying and satisfying. I dare you to forget it."

"I have burns on my fingers from turning the pages too fast. Don't miss it. This is her best yet!"

"Gudenkauf...keep[s] the tension high and the reader glued to the pages."

-Publishers Weekly on One Breath Away